The two figures below show the influence of melatonin intake respectively on REM and deep sleep. The intake was with 3mg of Melatonin (timed released) always taken between 10 and 11 PM (according to a study conducted with patients with reduced REM sleep duration, this time window seems the best for influencing positively REM sleep duration).
On the figures, the left bar (0) represents the average time spent without melatonin intake, the right one (1) with, and #data on the top of the bars gives the number of nights that have been collected. 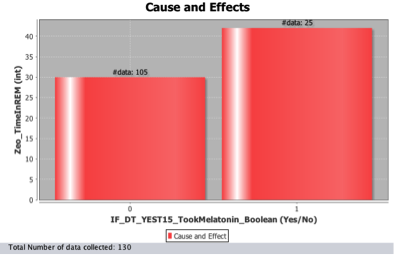