I decided to check my vitamin D levels and try to assess if a correlation could be made between potential vitamin D deficiency and time spent in deep and REM sleep, according to the extremely interesting work conducted by Sacha Gominak on these issues.

A summary of very first results of this experiment is given on the figure below. I started to record my sleep with Zeo in October, when it was already winter and very dark where I live (in North Europe). I took a first blood test end of December, and besides Vitamin D, I checked several other markers (since some of them are D cofactors or com­mon sec­ondary defi­cien­cies that also affect sleep): Vitamin B12, Iron, Magnesium, and Zinc. I was only deficient in D (slightly – 31 ng/ml), the other markers were correct apparently. I decided to start early January a vitamin D3 intake with supplements for two months (as mentioned on the top of the figure). I took the supplements in the mornings between 8 and 10 AM, and the dose was a bit too high (10.000 UIs on a daily basis), since I too quickly went beyond the levels considered as optimal.

The figure tends to show that there is no real improvement of my sleep with higher levels of vitamin D in the time frame of the experiment (compared for example with the data collected in October for which we can assume that my levels of D were very low as well). However, it is worth noting that these preliminary results are not really relevant for the following reasons:

Therefore, I am pursuing this experiment by tracking my D levels regularly in order to gather data for a longer time frame, and with the goal to stay stable in this window of 60-80 ng/ml (check out Sacha Gominak’s website for more insights on potential optimal range of vitamin D3 levels). Updates related to this experiment to be provided soon then! 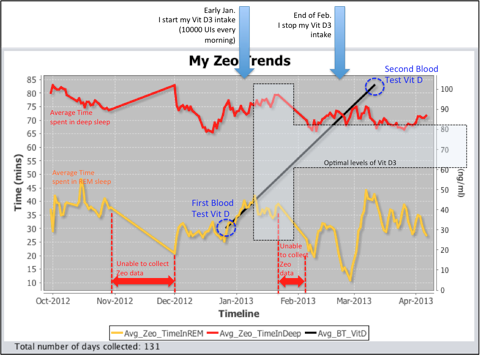 Fig. 1: Average time spent in deep and REM sleep compared with an estimation of Vitamin D levels (based simply on 2 blood tests).

References & Links
[1] Dr. Sacha Gominak’s website on sleep disorders and Vitamin D Hormone deficiencies.
[2] Vitamin D council, the “official” and extremely well-documented forum on vitamin D and health.
[3] An interesting video explaining the role of the C-Reactive Protein as a marker for determining your optimal D levels (unfortunately, in the country where I live, it seems almost impossible to test this marker).
[4] Interesting experiment conducted by Chris L, showing that vitamin D seemed to impair his sleep.
[5] Some experiments conducted by Gwern on vitamin D, and testimony collected by Seth Roberts on vitamin D intake (interesting, but only focused on a comparison between supplements taken in the morning vs. taken in the evening, but did not consider D levels in the blood, which is the most important variable to be tracked since the D3 is not a vitamin but an hormone)